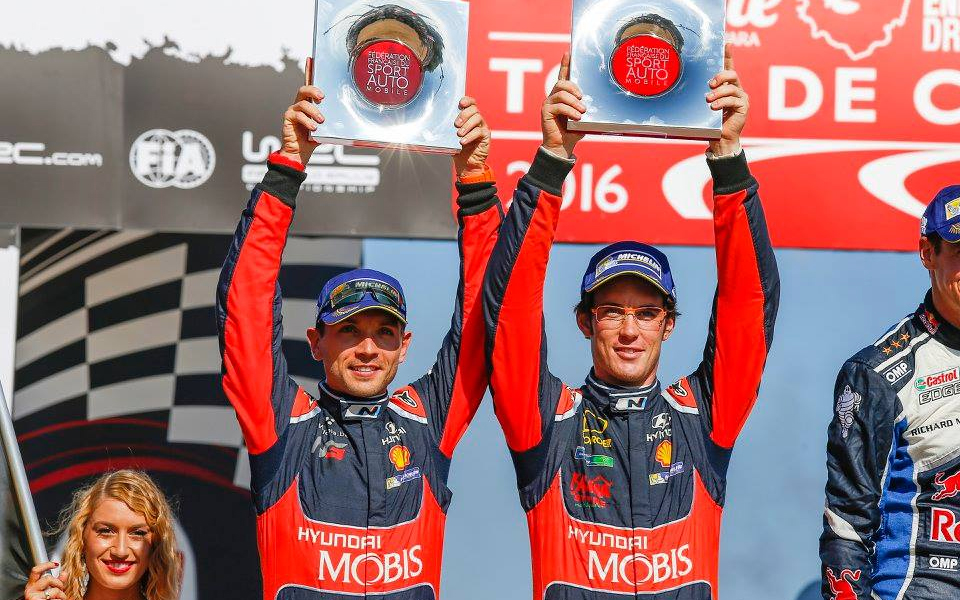 Happy, in fact extremely happy: there is no other way I can summarise my state of mind after the finish of the Tour of Corsica, where once again together with Thierry Neuville, I enjoyed the pleasure of being on the podium.

Not having kept any good feelings of our 2015 participation, we set-off with a clean sheet when it came to the pace notes, especially seeing that 70% of the course was previously unseen. Even though it required a supplementary amount of work, this approach paid off. In fact, we put in a ‘solid’ rally and had the feeling – pleasant – that everything was under control: perfect fine-tuning worked out together with our new engineer Gérard Zyzik, a great job put in by the openers and the Hyundai team, confidence in the cockpit, the joy of playing a leading role; all the conditions were reunited to put in a choice performance; and to evolve in such a context is both motivating and stimulating.

During the first two days we maintained a high pace prior to putting in a hard blow in the final special stage on the Saturday where the rain put in an appearance: by clocking up a scratch on a rain soaked course we clearly built up a gap on the VW Mikkelsen-Jaeger duo who were setting their sights on our 2 nd place. As such we were able to assure that we clinched a silver medal on Sunday, all the more convincing as it was secured at the end of a true Tour of Corsica.

The island’s organisers accomplished a super job to draw up a course that was both selective and demanding in its diversity: both wide and narrow sections, pitted portions followed by perfectly smooth tarmacked sections, ever varying changes of grip, thousands of… curves and bends each one different, a drop of rain to spice up the battle, this 2016 edition offered up a spectrum of everything that makes a rally beautiful! On top of that each day offered up a special stage of more than 50 kilometres – to be covered twice on Friday and Saturday– which demanded a specific management of the tyres. Bringing all these elements together makes you realise to what an extent this tenth World round did not allow for the slightest slackening. The pleasure experienced when climbing up on to the second tread of the podium just behind the World Champions was more than awesome!

As I mentioned during our pervious contact, the month of October promises to be pretty heavy. Scarcely back from Corsica, I will be off again for two days of testing, after which as from the following Monday I will be heading off for Catalonia to make a start on the recce for the unique mixed round – unpaved and asphalt – of the World calendar.   More news to tell you all about it shortly.