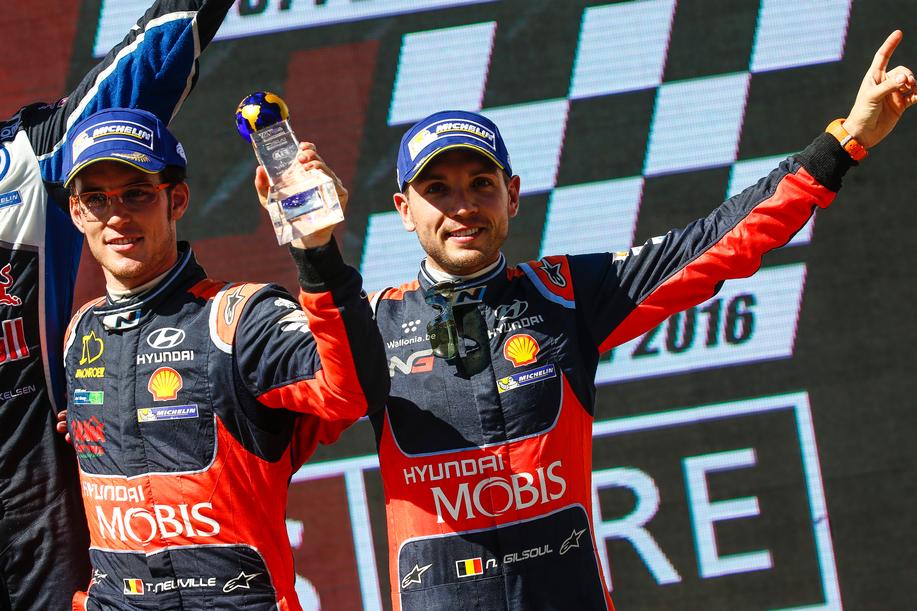 It’s with a broad grin (and dark rings under the eyes) that I’m writing to you. The WRC 2016 season concluded on a highly positive note and we leave Australia with the title of World Vice-Champions under our belt.

The Rally Australia brought the championship to a close this year: a unique event, unbelievably full of fun, that Thierry and I particularly appreciated. The Australian rally is a flat out sliding course on unpaved routes through the jungle, a course made up of natural hyper fast toboggan type runs, not forgetting the heat and… the dust. Lots and lots of dust!

For the first two days we had to set off in 2nd position, and ‘sweep’ the route for the following competitors. A heavy handicap, especially for the morning special stages. During the second run in the afternoon, the course had become more abrasive, allowing us to restrict the damage and to remain in the immediate wake of the best.

In these gruelling conditions the Hyundai’s reliability worked wonders: throughout the season the engineers and the mechanics truly made headway with the car. She resisted the rugged terrain with its dust and extremely high Australian summer temperatures. In the cockpit of our i20 there is no thermometer but to give you an idea, during the lengthy Nambucca special stage, my smartphone automatically went into ‘safety’ mode due to the heat … 🙂   On Sunday morning we reclaimed third place from Hayden Paddon, who had made a slight mistake, never to relinquish it. This new podium allows us to end the championship in second place. An incredible result that has rewarded us for all our efforts.

And seeing good news never travels on its own, I have just been awarded the co-driver’s prize of the year during the WRC promoters gala evening This award means a great deal for me and it punctuates this season in the greatest possible manner!   And now, you might ask? Holidays, turquoise blue water and palm trees?   Not really …  As from next Sunday we will be in the region of Gap to test the 2017 car: first tests on asphalt with a view to the Monte Carlo. I can’t wait! The following week I will be on hand for the official presentation of the 2017 team at the Monza Rally Show, followed by the FIA prize-giving in Vienna and finally the Champion’s Day at Mettet, where Thierry and I are competing with great pleasure. I hope to see many of you at the event!

Last but not least I wish to take this opportunity to thank you for your messages and encouragements throughout the season. These small attentions have greatly touched me. Over and above all, don’t change anything next year 😉