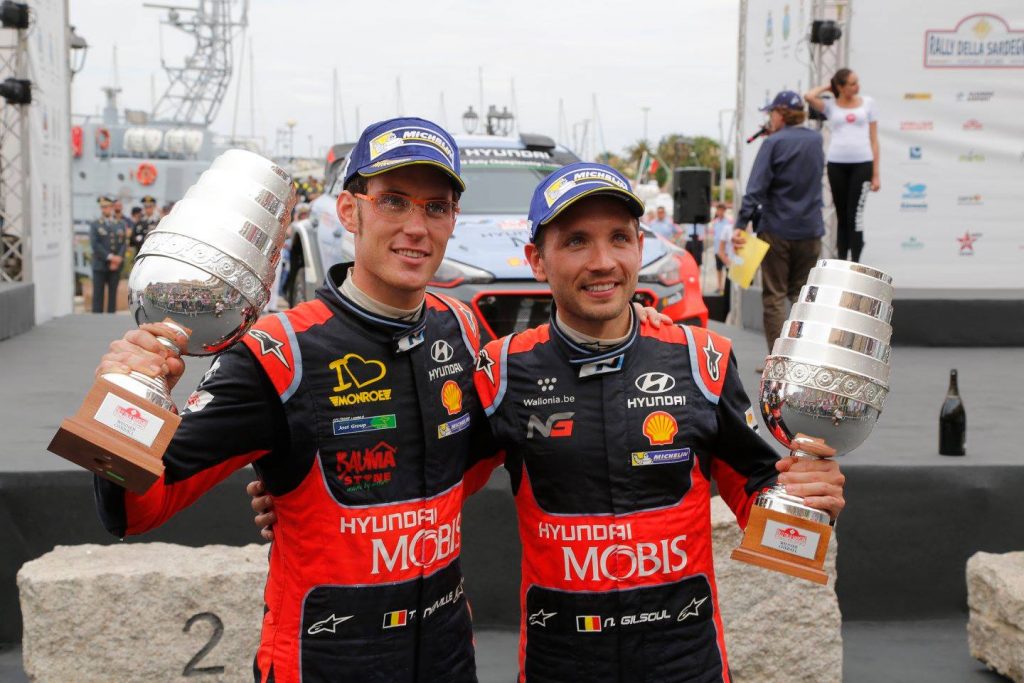 [vc_row][vc_column][vc_column_text]There is no exception to the rule for the World Rally Championship: as with most sporting disciplines traditions exist that no one can depart from. And so, with the podium ceremony hardly over the winners of the Rally d’Italia Sardegna ‘must’ dive fully dressed into the water of the Alghero harbour, the nerve centre of the WRC’s Italian round.

As such I treated myself to respect this tradition with my driver Thierry Neuville but also our engineer, the chief mechanic and other members of the Hyundai team in order to celebrate in dignity our victory of this fifth round of the season. And believe me I will not readily forget that bath in the Mediterranean in so far that it crowned a race that was perfect in every way!

At the time of our previous contact I had set a rendezvous in Portugal. In fact I was convinced that the event was to be a major moment in the team’s 2016 campaign that I form together with Thierry. I merely committed a small timing error … An incident independent of our will in fact ruined our chances of a top performance on Portuguese soil, but we knew that it would only be a matter of time. In fact Sardinia left us with some excellent memories seeing we had finished on the podium there in 2013 and 2015; in other words we ‘felt’ a close tie with this Italian round of the calendar.

Right from the start confirmation was there that we could play a leading role. As from the shakedown, the short special- test stage scheduled a few hours before the start, Thierry and I knew we had the confidence in us to put in some good performances. And as the kilometres progressed this feeling confirmed itself: we were in perfect harmony with our Hyundai i20 ideally prepared to take on a highly demanding course, our pace was adequate as it allowed us to evolve up front without taking any senseless risks on punishing gravel roads for both man and machine, our pace notes perfectly reflecting the difficulties of the special stages, in short it was on the books. And it was!

Throughout the entire race, we crossed swords with the Finns Jari-Matti Latvala and Mikka Anttila who were just ahead of us in the special stages, and subjected to identical road conditions. It was soon apparent that the gold medal would be down to one of us.

It was a fair fight and we prevailed with some twenty seconds advantage over our rivals, claiming our second world victory following that of Deutschland 2014. But specifically, the success in Sardinia takes on a particular lustre seeing it was achieved following an excellent battle that lasted through to the final kilometres, whereas in Germany we partly won as the result of problems experienced by our nearest rivals.

For a sportsperson, to triumph and allow one’s partners to excel in that context is particularly gratifying.  Recognising it to have been a tiring race – 16 hours in the cockpit during the Saturday –, this result tuned up just at the right moment before several major meetings. At the beginning of July, the WRC will be in Poland prior to heading off for Finland, some four weeks later, followed by Germany during the third weekend of August. I would be delighted to count you among the supporters who will be making the short trip in the region of Trier – or Trèves, if you prefer– where the German round is to be held; not really far from Belgium…  To conclude, I can assure you that the victory clinched in Sardinia boosted my morale no end and that I will do my utmost to continue my 2016 season in this same light.[/vc_column_text][/vc_column][/vc_row]