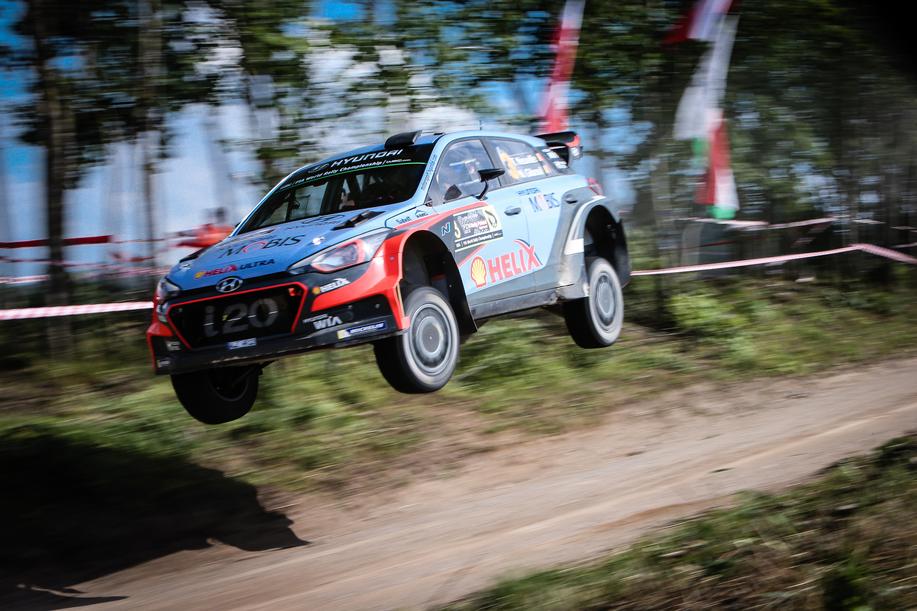 I’m delighted to be back among you once again and give you some more good news.

Together with  Thierry Neuville we completed the Rally Poland in 4th place, finishing a mere 8 tenths of a second  behind our teammates Hayden Paddon and John Kennard… and 3 seconds down on the team  classified in 2 nd place. It goes to show how close the battle was!

An extremely positive result, especially since it allows Hyundai to score some substantial points in  the Constructors World Championship.

Taking in some rather sandy tracks the course of the Rally Poland is very fast and the numerous  curves are negotiated in either 5 th or 6 th gear. During the first two days of the race it was terribly hot,  more than 30 degrees, which for the competitors made it even more complicated. Then on Sunday  the rain put in an appearance, which somewhat reshuffled the cards: the course became extremely  muddy, creating large puddles of water with numerous stones appearing, resulting in punctures and  suspension problems. Luckily we managed to avoid these pitfalls to reach the finish in 4 th place,  confirming our place among this small circle of candidates for overall victory in the World  Championship.

Apart from misting up during the last stage, we only experienced one worry but it is worth  mentioning. On the Hyundai i20 WRC, the driver changes gears via paddle shifters, however a  traditional gear shift is fitted to overcome an eventual system failure: don’t ask me why, but this  lever broke right in the middle of the stage … and lodged itself along Thierry’s leg, hindering him  during several braking points. Although in theory this may have been a small problem, the incident  cost us a few seconds … and, who knows, perhaps a place on the podium.

But that is not the most important: as I said, this result in Poland came just at the right moment to  further bolster our morale on the eve of a short break that will allows us to recharge our batteries  prior to tackling the second half of the season in Finland, on another course for the ‘big boys’.

Before that I will have negotiated a major turning point in my life … I think I can tell you: I’m writing  this just prior to jumping on a plane that will bring me straight back to Belgium where my partner  Cindy is about to give birth to a little girl; and for nothing in the world would I want to miss this  unforgettable moment!