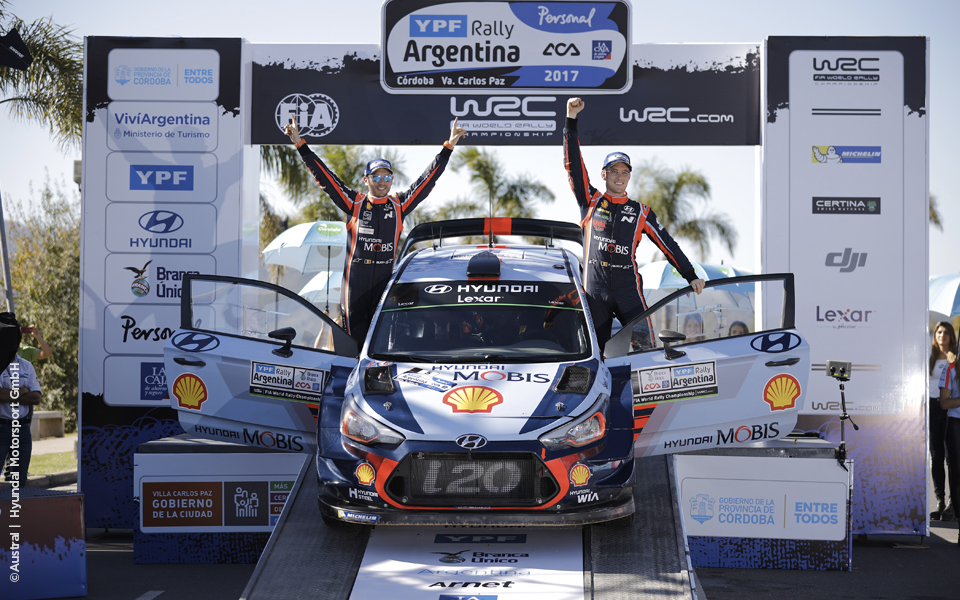 Every victory is unique: there’s the first one, the most emotional; there are the crushing ones, the lucky ones, … and then there are the victories in suspense, the ones on which you refuse to give up, the ones you know you can get even though nobody else believes it. This is one of this victory we’ve just won.

I will remember Rally Argentina forever and so will every single rally fan. We fought with Elfyn Evans and Daniel Barrit for every second, the kind of battle that makes the WRC a legend… I have to admit it: this Sunday, I lived an old dream.

But let’s go back 2 days earlier, shall we? Our first objective on this rough and very treacherous tracks, was to make it until the end of the rally. With a regular pace (even though Thierry always drives at a great pace

) and without taking any inconsiderate risk… In Argentina, more than anywhere else, in order to finish in first position, you have to… well, finish!

We avoided every trap and on Friday night we were at the third place, trailing Evans by a minute. A gap that seemed quite impossible to fill the regular way… The two first stages on Saturday confirmed the ranking and then, in the twelfth stage, we took 6 seconds back. Three stages and two fastest times later, we were only trailing by 30 seconds. What if…? What if it was possible, after all? What if we could make it?

You know what happened next: thanks to a flawless Hyundai (the team did a perfect job once again), and super effective Michelin tires, we gleaned the seconds and pipped the Welshman at the post at the end of the Power Stage, winning by 7/10 seconds! 7/10!!! Can you believe this?

I really want to congratulate Elfyn on his incredible performance. He was first during the whole rally and he would have deserved the victory as much as we did. His time will soon come, I have no doubt!

This is for this kind of emotion that I do rally… I already feel sorry for my daughter Myrtie, when her old father will tell her for the thousand time how he won the Rally Argentina 2017 by less than a second.

In the meantime, I hope to see you in Portugal. Thierry and I mean to keep things the way they are and make another great result.

PrevPrevious10,000 corners… and a victory!
NextThe party goes on and on!Next