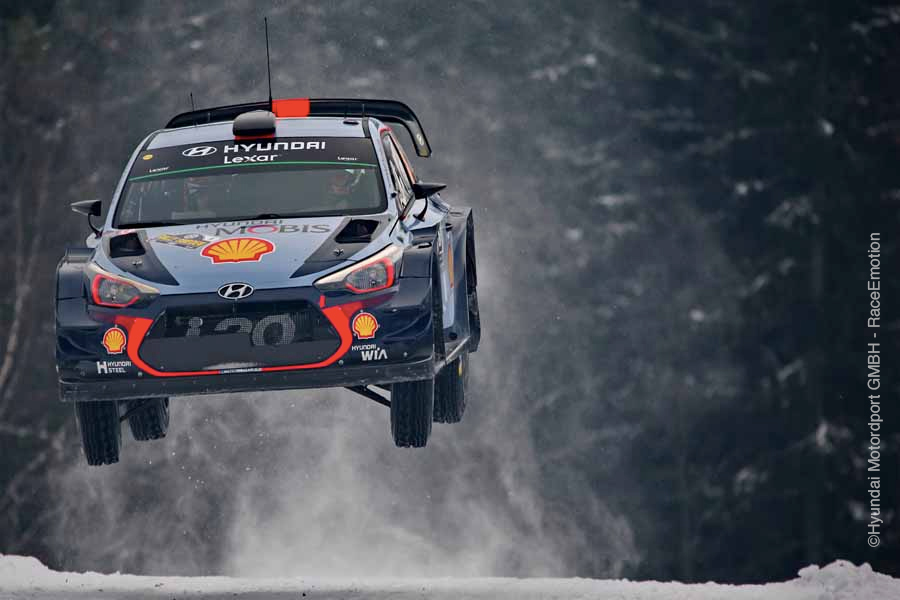 Just this once, I’ll start this road book with the conclusion: Thierry and I are hungry! Hungry for victory, for fun during the stages and for trophies to share with our team. I wanted to make that clear before I started the recap of this Rally Sweden … We’re hungry and our appetite is intact!

The feeling was great from the moment the wheels started spinning. Just like in Monte, we instantly knew that we would perform well: the car works on the snow as well as it does on tarmac, and the first split times immediately confirmed our first impression.

Day one was amazing. The Swedish snow and ice felt like velvet under our wheels… The high-speed stages were perfect for our i20 WRC and Thierry was more focused than ever. Result was: 5 fastest out of 7 stages, and a 28s lead over Jari-Matti! We went back to Torsby’s Service Park as undisputed leaders.

On the next day, we meant to manage the stages… we were determined not to make the same mistake as in Monte Carlo. Great tactic: we never were really threatened… quite the opposite actually, since our closest pursuer was over 43s away! There was only the Super Stage left, a show stage, no longer than 2km… Then it all went wrong!

While the route wasn’t especially difficult, we slightly hit a pile of truck tyres in a left curve… Two or three more centimeters and we would’ve been OK, but this small mistake (the only one of the rally) was fatal: the steering shaft was broken… and the competition was over.

I could try to find a thousand reasons to explain this: long liaison section, tiredness, less deep concentration, bad luck or whatever, but I won’t. This is our mistake, and we take full responsibility for it.

We’re deeply disappointed, obviously. Disappointed for ourselves, for our fans… but especially for the team, who did an amazing job. We owe you a revenge and we are determined to take it starting from the next rally! In the meantime, I think this is the right moment for me to open my quote book: “It’s not how far you fall, but how high you bounce that counts.” I don’t know who said that but it seems quite appropriate*

Since I’ve started with the conclusion, I won’t repeat it. But you’ve understood that our motivation remains strong and that we can’t wait to fight in Mexico!

Meanwhile, I hope to see you all at the rally of the Legend Boucles de Spa!

Thanks for your support!