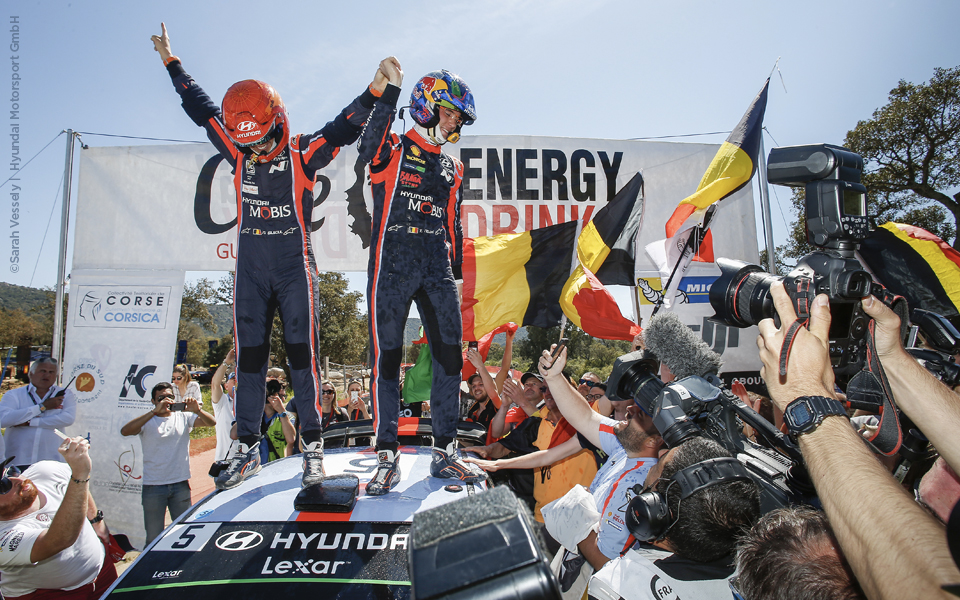 There it is, we scored our first victory of the season, after a perfect race. Rally Corsica is one of a kind… Breathtaking landscapes, abrasive tarmac, bumpy roads, corners, corners, and corners again… a race made for the new WRC 2017. It also is a real challenge for the co-drivers: a weak stomach is not an option!😜

This is also the place Thierry and I scored our first international victory in 2011, in the IRC Championship. We love this rally… and so does it. From the shake-down on and during the first day, it was far from being easy, though. Our duo was working extremely well, the pace notes were coming one after the other, and Thierry was driving to perfection. But Kris Meeke and Sébastien Ogier were untouchable and by Friday evening, we were in third position, trailing them by 25 seconds.

I often tell you that the mechanics and engineers of Hyundai Motorsport are world’s best… well, they proved us right one more time. They decorticated the telemetry, perfected the settings and on Saturday morning, we went back on the road with a razor-sharp i20. The result was 2 fastest times in 2 stages, including the one of La Porta (48.7 km!). We were in the lead and we hold this position until the end. Kris’ retirement and Seb’s mechanical problems allowed us to take no risk while keeping a rapid pace, and to win our third success in WRC on Sunday.

Throughout the rally, Thierry was relaxed, chilled and super effective. We knew it was going to pay, we never doubted it, and this victory in Corsica made us hungry! We’re already thinking about Argentina, another land of passion for the rally fans… a round that never especially turned out well for us, but we’re determined to reverse the trend! The Hyundai proved us it was competitive on every surfaces and there’s no doubt it will help us make another great performance! 🙂

One more thing before I go. When I was 13, the performance of Bruno Thiry and Stéphane Prévot during the Corsica Rally 1995 made me dream. They dominated the whole race before a broken wheel bearing deprived them from the victory. This week, Bruno was our recce crew leader. This is an unheralded work which is nonetheless incredibly valuable, and today Thierry and I would like to dedicate him our victory.